Canisia Lubrin one of three Canadian poets in the running for one of the world’s largest poetry purses, the Griffin Prize

By Stephen Weir: With each passing major literary prize, St Lucian Canadian poet Canisia Lubrin shows that her place is on the world’s literary stage.  Fresh on the heels of winning the $200,000 American Windham-Campbell Prize, the Whitby author has learned today that she is now in the running for Canada’s largest poetry prize.

This morning, Scott Griffin, the founder of The Griffin Trust For Excellence In Poetry, announced the International and Canadian shortlists for this year’s prize. Three Canadians including Lubrin are in the running for the annual $65,000 Canadian poetry prize.

The Griffin was founded in 2000 to encourage and celebrate excellence in poetry. The prize is for first edition books of poetry written in, or translated into, English and submitted from anywhere in the world.

Every year the Griffin family gives out two prizes; one to a book of Canadian poetry and one to an international book of poetry. Poets Canisia Lubrin, Joseph Dandur and Yusuf Saadi are the Canadian finalists this year. The two winners will be announced on Wednesday, June 23. Each will be awarded $65,000, while the other finalists – 3 International, and 2 Canadian, will receive $10,000 each. 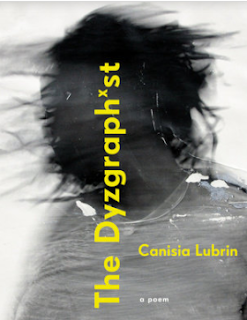 She has been shortlisted for her book The Dyzgraphxst.  It is described a  “spectacular feat of architecture called a poem …  it is about contemporary capitalist fascism, nationalism and the climate disaster, where Jejune, the central figure, grapples with understanding their existence and identity.”

When news broke about her making the Griffin shortlist, Lubrin was busy on Twitter urging her readers to help with Volcano relief efforts in St Vincent.  She did take a time out to tweet a note to say “Thank you to the judges and heart full congratulations to our companions.”

Last month Canisia Lubrin was one of eight authors to win the world’s most generous literary prizes, the Windham-Campbell Prizes. They are awarded annually to eight authors writing in English anywhere in the world.  Each received $165,000 US ($205,000 Cdn) to support their work. She was honoured for her poetry.

37-year old Canisia Lubrin is a writer, editor, teacher and critic, with work published widely in North America, as well as in the U.K. She is the author of the awards-nominated poetry collection Voodoo Hypothesis and augur. She teaches English at Humber College and Creative Writing at Sheridan College and in the University of Toronto's School of Continuing Studies.  Born in St Lucia she now lives in Whitby.