The Jab Jab About To Begin

St. Kitts and Nevis receive shipment of the Vaccine 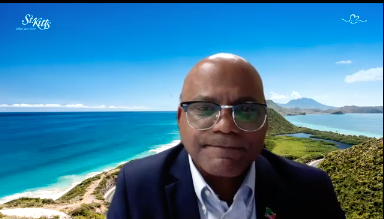 By Stephen Weir: Get ready to roll up your sleeves Kittitians and Nevisians. If all goes as planned, there will be a whole lot of jabbing go on next week!  The St Kitts and Nevis’ Covid Vaccine programme is about to start in full force.

During a Tuesday afternoon zoom press conference, Lindsey Grant (pictured above), the Federation’s Minister of Tourism, Transport and Ports told travel journalists from around the world that his country’s first shipment of vaccine has just arrived and inoculations will begin soon.

“Our Oxford AstraZeneca vaccines are here,” said a smiling Minister Grant. “ We will roll it out starting next week.”
Not all of the 52,000 residents of the two-island nation will receive the vaccine immediately. According to Chief Medical Officer, Dr. Hazel Laws, the first shipment received by her office contains just 21,600 doses of the COVID-19 Vaccine.

Talking last week to the Basseterre Observer newspaper, Dr. Laws explained that the World Health Organisation (WHO) established the total number of doses delivered and when. “It specified that about 25 to 35 percent of the amount would be supplied in the first quarter (of 2021) and about 65-75 percent in the second quarter.”

The two-island Federation’s approach to the Covid crisis has been described as both Draconian and highly effective.  Back in the spring of 2020 the islands quickly closed its borders to commercial traffic by air and sea.  A curfew was imposed and a massive public education campaign was launched.

It has worked so far. At the online presser the minister said that there have been only 41 cases of Covid in the Federation since the pandemic began. There are still 3 on-going cases, but no one has died from Covid. (This reporter confirmed the statistics with the WHO’s website)

“We reopened our borders (to tourists) on October 31st with some of the most complete and comprehensive travel requirements in place,” said the Minister.  To date no visitor has contracted the virus while visiting the Federation.

Most of the tourists are coming from the United States and Canada. Upon arrivals the visitors are quarantined for two weeks to various hotel complexes on St Kitts and Nevis.

If after the first week stay the guests tests negative, they are allowed to leave their hotels and visit specific tourism sites, but only under the watchful eye of specially trained drivers and guides.  Visitors are not allowed to rent cars or wander alone into communities during their stay.

“Our main industry is tourism,” explained the minister. “Tourism is our economic driver. It accounts for about 60% of our GDP both indirect and direct … True to form the effects of the pandemic has really caused a strain not only on tourism in St Kitts and Nevis but the entire economy.”