January 09, 2020
I don't write editorials for the Caribbean Camera. But I did this week.  Explanation: I have had clients who have earned Order of Canada medals, so I always take note when the Governor General announces her Christmas list of winners.  So, I wrote this editorial. The Caribbean Camera did edit it down a bit - and they removed the names of people who should never receive an OC - you know who you are. 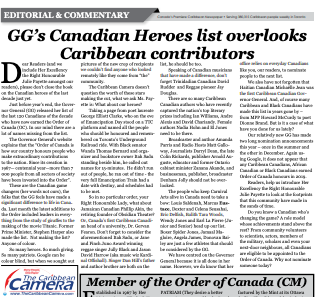 Dear Readers (and we include Her Excellency the Right Honourable Julie Payette amongst our readers), please don’t close the book on the Canadian heroes of the last decade just yet. Just before year’s end, the Governor General (GG) released her list of the last 120 Canadians of the decade who have now earned the Order of Canada (OC).
In our mind there are a lot of names missing from the list. The Governor General’s website explains that the “Order of Canada is how our country honours people who make extraordinary contributions to the nation. Since its creation in 1967— centennial year—more than 7 000 people from all sectors of society have been invested into the Order”. These are the Canadian game changers (her words not ours), the folks that the GG feels have made a significant difference to life in Canada.
Last month the latest additions to the Order included leaders in everything from the study of giraffes to the making of the movie Titanic. Former Prime Minister, Stephen Harper also made the list.

So many heroes. So much giving. So many patriots. Google can be colour blind, but when we sought out pictures of the new crop of recipients we couldn’t find anyone who looked remotely like they come from “the” community. The Caribbean Camera doesn’t question the worth of these stars making the cut, what we ask Ms. Payette is: What about our heroes?
Taking a page from poet laureate George Elliott Clarke, who on the eve of Emancipation Day stood on a TTC platform and named all the people who should be honoured and remembered on Toronto’s Underground Railroad ride. With Black senator Wanda Thomas Bernard and organizer and bookstore owner Itah Sadu standing beside him, he called out names for 15-minutes. He didn’t run out of people, he ran out of time - the very full Emancipation Train had a date with destiny, and schedules had to be met.
So in no particular order, your Right Honourable Lady, what about Jamaican Canadian Phillip Akin, the retiring founder of Obsidian Theatre? Or, Canada’s first Caribbean Canadian head of a university, Dr. Gervan Fearon. Don’t forget to consider the aforementioned Itah Sadu, or Jane and Finch Juno Award winning reggae singer Jully Black and Jason David Harrow (aka music wiz Kardinal Offishall). Singer Dan Hill’s father and author brother are both on the list, he should be too. Speaking of Canadian musicians that have made a difference, don’t forget Trinidadian Canadian David Rudder and Reggae pioneer Jay Douglas. There are so many Caribbean Canadian authors who have recently captured the nation’s top literary prizes including Ian Williams, Andre Alexis and David Chariandy. Female authors Nadia Hohn and El Jones need to be there.
Broadcaster and author Amanda Parris and Radio Hosts Matt Galloway, Journalists Darryl Dean, publisher Arnold Auguste, educator and former Ontario cabinet minister Zanana Akande, and businessman, publisher, broadcaster Denham Jolly should not be overlooked.
The people who keep Carnival Arts alive in Canada need to take a bow: Louis Saldenah, Marcus Eustace, Dexter and Celena Seusahai, Eric Delfish, Eulith Tara Woods, Wendy Jones and Earl La Pierre (Junior and Senior) head up our list. Boxer Spider Jones, Jamaal Magloire, Angela James, Donovan Bailey are just a few athletes that should be considered by the GG.
We have centred on the Governor General because it is all done in her name. However, we do know that her office relies on everyday Canadians like you, our readers, to nominate people to the next list.
We also have not forgotten that Haitian Canadian Michaëlle Jean was the first Caribbean Canadian Governor General. And, of course many Caribbean and Black Canadians have made this list in years gone by – from MPP Howard McCurdy to poet Dionne Brand. But is it a case of what have you done for us lately?
Our relatively new GG has made two long nomination announcements this year – once in the summer and the other in December. Again using Google, it does not appear that any Caribbean Canadians, African Canadian or Black Canadians earned Order of Canada honours in 2019.
Readers, help us introduce Her Excellency the Right Honourable Julie Payette to look at the footprints that this community have made in the sands of time. Do you know a Canadian who’s changing the game? A role model whose achievements stand above the rest? From community volunteers to scientists, actors, members of the military, scholars and even your next-door neighbours, all Canadians are eligible to be appointed to the Order of Canada. Why not nominate someone today?

Pictured below - In November there was a ceremony in Ottawa to present the Order of Canada to people who had been named earlier in the year. Note Captain Kirk (William Shatner) bottom right 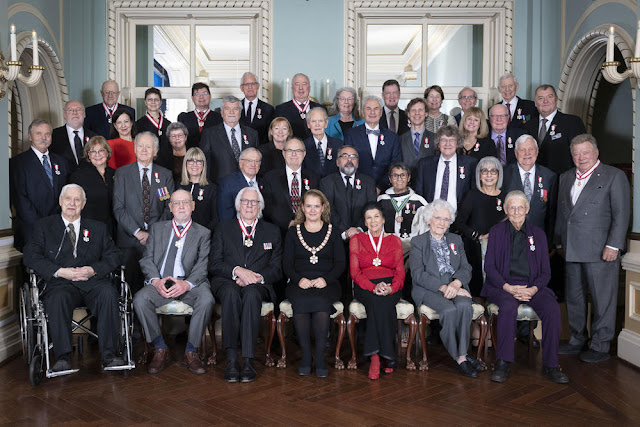